A plane carrying five adults crashed about eight miles southwest of Iliamna around 1 p.m. on Saturday, according to a dispatch post from Alaska State Troopers.

Alaska Wildlife Troopers launched an R44 helicopter from the King Salmon area, and local crews and private aircraft from Iliamna tried to access the site. That included volunteer search and rescue

All five survived the initial impact, and are receiving medical care at Anchorage area hospitals. One person is in serious condition, one is in fair condition, and three are in stable condition, troopers said in an update Sunday afternoon.

Around 1 p.m. on Saturday, troopers received notice of an emergency locator transmitter — a device that sends out an audio alert and GPS signal when activated. The signal was coming from the offshore ice on the lake.

Alaska Wildlife Troopers launched an R44 helicopter from the King Salmon area, and local crews and private aircraft from Iliamna tried to access the site. That included volunteer search and rescue members and others from around Iliamna, and Lake and Peninsula Airlines and Iliamna Air Taxi. Trooper spokesperson Austin McDaniel said the helicopter arrived at the scene around 3:45 p.m. 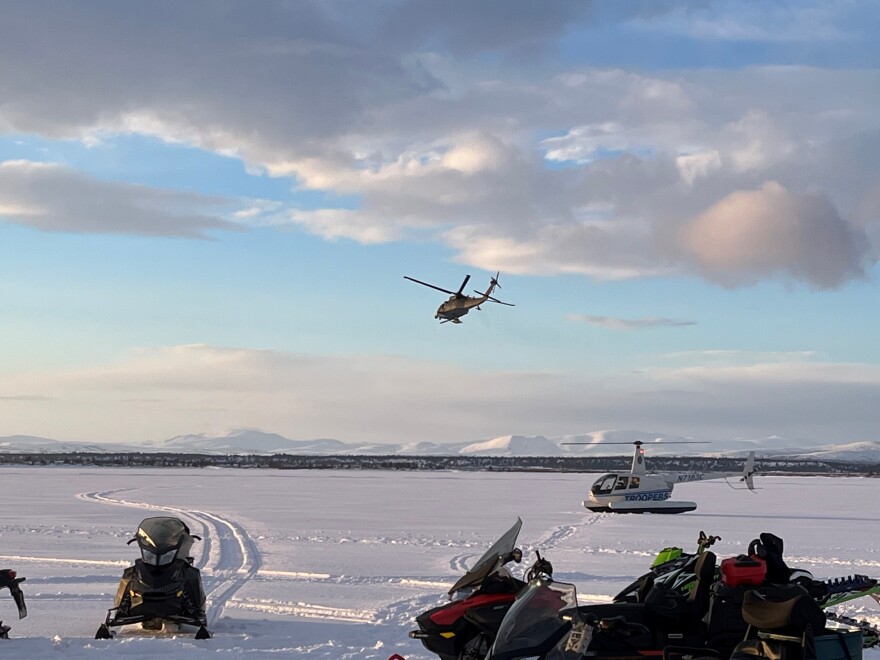 Courtesy Of The Alaska State Troopers

An Alaska Air National Guard Helicopter arrives at the scene of the March 5 plane crash.

Rescue teams and troopers located a Cessna 206 with a tail number of N1853Q which had been destroyed in the crash. According to the Federal Aviation Administration registry, the plane is owned by SEND North, the Anchorage-based branch of SEND International, an evangelical missions organization. Send North “supports and administers remote ministry activity” in Alaska and parts of Canada.

Bad weather conditions initially stopped rescue teams from the Alaska Air National Guard at Joint Base Elmendorf Richardson and the U.S. Coast Guard in Kodiak from reaching the scene.

At about 6 p.m. — at least five hours after the plane went down — those rescue teams arrived at the crash site and lifted all five people from the scene. They were flown to Iliamna and then medevaced to hospitals in the Anchorage area.

The National Transportation Safety Board was notified of the incident and will investigate the cause of the crash.

This is a developing story. Check back for updates.